The CSA&G is proud to announce the publication of our latest monograph: Gendered and Sexual Imagi(nations), the 2018 Zimbabwean E(r)ections and the Aftermath from the Gender Justice project.

Gendered and Sexual Imagi(nations) attempts to answer questions that have been central to scholarship within the humanities. Drawing on the concepts which Schneider refers to as the basic building blocks of society, i.e. “the quartet of kinship, economics, politics, and religion”, Mawere explores, on the one hand, the historiography of the Zimbabwean state, specifically the Mugabe era, and the particular ways in which it has been underpinned by a deeply rooted system of patriarchal values. On the other hand, this text asks questions which most authors have shied away from asking. Rather than constructing a perspective which imagines leaders of ZANU-PF and the MDC in natural opposition and fundamentally different because of divergent political visions, Gendered and Sexual Imagi(nations) asks its readers to take note of the commonalities shared by male leaders of these parties, and, in fact, held by most male politicians.

In the first part of this monograph, Mawere tells the story of three women – Joice Mujuru, Grace Mugabe and Thokozani Khupe – and how ultimately these women were deemed unfit to occupy the political sphere because of their gender. The text highlights that it was because of their gender, rather than owing to their actions, that they were regarded as undesirable in the political terrain. Through a discursive analysis of the 2018 presidential campaigns, Gendered and Sexual Imagi(nations) draws attention to the misogynism that characterised both Chamisa’s and Mnangagwa’s performances. Throughout their campaigns these men drew explicitly on notions of hegemonic masculinity, naturalised gender roles and their own sexual (in)abilities.

Mawere compels us to take a step back and to ask whether social justice is possible while women continue to be marginalised, vilified and objectified. The ways in which we imagine possible futures are crucial for those of us who work within the space of social and gender justice. Gendered and Sexual Imagi(nations) reminds us, however, that we need to do more than imagine futures in which the men at the top change while the fabric of society remains the same. Instead, it asks us to imagine a society that appears, thinks, and acts in radically different ways to the ones that we know. We need to ask whether and how we can imagine a society in which women are not relegated to the domestic sphere, and where women who challenge the status quo are not labelled immoral, irresponsible and irrational. However, this would require dismantling of the patriarchal ideologies that prevail as yet another generation of young men flex their muscles, calling for the strongest rooster to step forward. 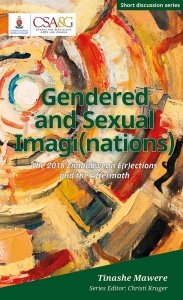